My first dog appeared in 2005. When choosing a breed, I was looking for a dog suitable for sports and the house guarding, capable to become a companion for the child. The choice was made in favour of an Italian Cane Corso, and, almost during one year, I was gathering information about this breed.

Now I can assuredly say that Corso is exactly what I was looking for. The dogs are excellently trainable, strongly oriented at the master and his family, devoted and accurate with children, loyal to other animals.

Having impressive appearance and dimensions they are not inclined to motiveless aggression, excellently feel the situation and they are hardly ever wantonly venomous. The Cane Corso are very intelligent, with excellent trainability. Alongside with that, this is the breed demanding serious attitude to breeding — the first-time owners must train the dog under the guidance of an experienced instructor.

I believe that for the moment the strongest stock is accumulated in Italy and in Russia. These dogs are notable for athletic make-up with stunner heads and correct breed’s psyche.
It is necessary to work for the standardisation of the stock and to avoid hyper-uniformity — the dogs should not be too big, should not have “too much coat”, too much short-faced. After all the Corso, — first and foremost — is a functional and healthy dog, and the breeders are able to preserve it as it is. 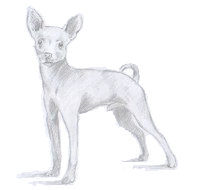 The Russkiy Toy (Russian Toy) is the second breed of the breeding kennel.
This is quite a dog in miniature, whose weight varies from one and a half to three kilograms. The breed was developed in Russia, the main stock is also in Russia. The Toys are very cute, spry, gentle, with gay disposition and unusual exterior. They require the minimum care, but bring the maximum pleasure from communication.

Many people have heard a lot about excessive noisiness and restlessness of the Toys. But this is a problem of breeding, more exactly of the lack of it, rather than of the breed. Since these dogs are very spry, then the lack of proper training tells on the behaviour, particularly when several representatives of this breed live in one and the same flat. There are many Toys, who do not bark or mess around, they are very calm and gentle, because the barking and excessive turmoil are not encouraged by the masters. The Toy is very easy to train, particularly, if the master takes it often for a walk and socialises the pup in due time.